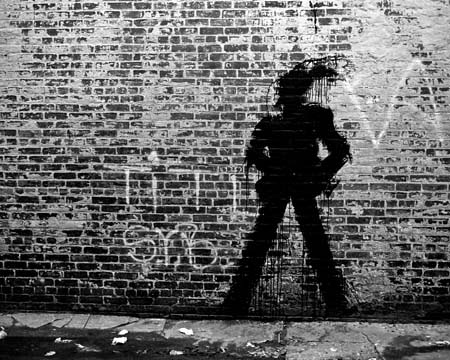 As a child in Texas, Hank O’Neal first experienced photography when he watched his father print his World War II photographs and family portraits in a kitchen darkroom. A few years later, in 1952, he won a Brownie Hawkeye in a drawing at a small grocery store and began taking and processing his own pictures. Child in Spacesuit, 1953, is a product of those times.
Twenty years later, in 1973, O’Neal had a better camera, his first book, The Eddie Condon Scrapbook of Jazz, was published, and he had his first modest photography show, Winona, Texas, at The Open Mind Gallery, an appropriately modest establishment in the soon to blossom Soho district of New York City. By then, photography had become a serious avocation, and during that period O’Neal formed lasting friendships and working relationships with such noted photographers as Berenice Abbott, Andre Kertesz, all the living Farm Security Administration photographers and many others. Additionally, he came to know many dealers, critics, and curators interested in the art of photography, particularly Lee Witkin and those associated with his gallery, as well as Harry Lunn. His relationship with The Witkin Gallery continued until it ceased operation in 1999, and with Harry Lunn until his death in 1998. More recently he has been associated with Howard Greenberg.
In 1972, O’Neal met Berenice Abbott and began a working relationship with her that lasted nineteen years. It was Abbott who convinced him of the merits of a large format view camera, suggesting that if he’d buy one, she’d teach him how to work it. He did and she did, in an abbreviated thirty-minute session. About the same time, Bert Stern suggested there was equal merit in medium format cameras and gave O’Neal a spare Rolleiflex to prove the point. No lesson was involved.
Now, equipped with a Leica, Nikon, Rolleiflex, and Deardorff, O’Neal began to take serious photographs. His visual boundary was provided by a conversation with John Vachon, who told him, "I knew I would only photograph what pleased or astonished my eye, and in the way I wanted to see it," and this sounded like a fine philosophy. Abbott provided the intellectual boundary, when she admonished O’Neal, saying, "Don’t take photographs willy-nilly, you have to have a project."
Walker Evans added another point, when he told O’Neal, "It doesn’t count unless you find it yourself." He paid attention to all three of these fine artists and for the next four decades followed their advice, accumulating a large body of work in the process. O’Neal has constantly discovered subjects he feels to be visually astonishing, and has integrated them into various projects. Except for those photographs taken for a specific assignment or publication, until his major one-man show at The Witkin Gallery, he elected to keep most of his work private. Since the Witkin retrospective, he has shown and published his work with increasing regularity.
Many of O’Neal’s photographs are often work-related, portraits for LP jackets and CD booklets, documenting recording sessions, illustrating books or producing booklets for his music festivals. Since 1971, he has produced over 200 LPs or CDs for his companies, Chiaroscuro Records and Hammond Music Enterprises. Since 1983, he and his partner, Shelley Shier have produced over one hundred music festivals, through their New York City-based production company, HOSS, Inc.
Along the way, O’Neal has also published a number of books and monographs, including the now classic work on the Farm Security Administration, A Vision Shared – A Portrait of America and Its People 1935 – 1943 and the landmark study of his friend, Berenice Abbott – American Photographer. His own photographs appeared in a variety of books and publications, the award-winning book, The Ghosts of Harlem in 1997, to be reissued in 2008), Hank O’Neal Portraits 1971 – 2000, and in 2006, Gay Day – The Golden Age of the Christopher Street Parade. One of his more unusual accomplishments was producing a series of photographs that accompanied a special Limited Editions Club edition of Robert Penn Warren’s All The King’s Men. A special portfolio of these gravure prints was issued along with the book.
O’Neal has produced a wide ranging body of work, portraits of friends and associates, ironic images from many parts of the world, and continually added to projects that have lasted two or three decades. Examples of his work may be seen in the photo section of hankoneal.com. The many illustrated books can be seen in the book section of hankoneal.com.
In addition to the musical and photographic interests, O’Neal’s other activities are as varied as the subject matter of his photographs. He received a BA from Syracuse University in 1962, and was well on his way to an MA, when, in 1963, he was snared by the Central Intelligence Agency, with whom he was associated until 1976. While he was with this organization, he also served on active duty in the US Army, rising to the rank of Captain.
O’Neal came to New York City from Washington, D.C. in 1967 and still resides in Greenwich Village. He joined the faculty of The New School University in 1970 and remains affiliated with that school as a member of the Board of Advisors of the Jazz and Contemporary Music Program. For the decade of the 1970s, he was associated with the modern dance company, Choreographer’s Theater, for whom he not only created sound and visual collages, but also, on occasion, danced. In the same decade, he built and operated two recording studios in Greenwich Village. During the years 1983 through 1995, he was an advisor to the Justice Department and is currently on the Board of Directors of various arts organizations, galleries and corporations, most prominently the Jazz Foundation of America/Jazz Musician’s Emergency Fund, the National Jazz Museum in Harlem and The Jazz Gallery.
2019 X Gallery. All rights reserved.
Powered by ZENFOLIO User Agreement
Cancel
Continue