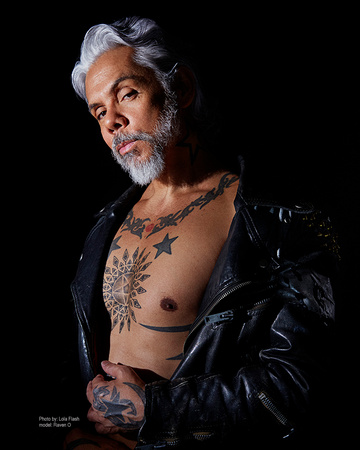 Lola Flash Legends Artist statement
These are the people who spearheaded a movement that wasn’t a given. They are actors, advocates, DJ’s, performers, and much more. They are the trailblazers who presented an honest vision that clashed against societal norms, as we knew it. They were not trendy, but instead are “trendsetters”. These actions alone placed them in harm’s way; due to homophobia, they could have been killed. But they were the lucky ones. And, many decades later due to their combined struggles and persistence, our queer and non-gender conforming communities can finally begin to live in their own skins. We are being acknowledged within institutions; as the legal system begins to give us long overdue rights in the workplace, equality in marriage policies, gender-free lavatories and in many places, even school children are able to generate their chosen pronoun.
This transparent progress has been issued in with the guidance of these icons’ refusal to be anything other than themselves. They were not complacent; instead, they lived and still live their lives, often fighting daily battles of homophobia, transphobia, racism, and sexism. Although we are still demanding equality, the state of affairs has changed dramatically, because of these folks. There is definitely a progressive mindset, in America that is clearly in place. Where there was once no canon, each LEGEND in their own beautiful way, has harnessed a pride that transcends hate. They made it possible for the LGBTQ+ communities to not only survive but to live a life of love. www.lolaflash.com
2019 X Gallery. All rights reserved.
Powered by ZENFOLIO User Agreement
Cancel
Continue