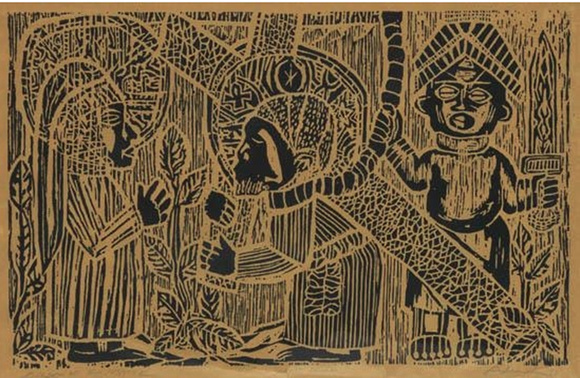 Ademola OlugebefolaAs a noted artist and cultural activist, he has a distinguished record of hundreds of exhibitions in major American museums,and universities and has exhibited internationally. His graphics, production and stage design experience has served The NY Public Theatre, The New Lafayette Theatre, American Place Theatre, New Heritage Theatre Group, AUDELCO, Frank Silvera Writers Workshop, Community Works, National Black Theater, New Federal Theatre, North Carolina National Black Theatre Festival, Bermuda International Arts Festival and the annual NY International Fringe Festival among others. He was on the founding committee for New York Dance Week Samples of his paintings and published graphics can be found online at Ademola Olugebefola, Legacy of a Living Artist among a multitude of sites
As an organizer, activist and educator he has represented the artistic community as a member of the Community Advisory Board of Columbia University’s Harlem Health Promotion Center; on the Board of Governors of the Robert Blackburn Printmaking Workshop; a member of the Adam Clayton Powell Memorial /Education Committee; and as arts adviser to the Greater Harlem Chamber of Commerce - Harlem Week and is honored to be one of the co founders of the New York Chapter of the National Conference of artists. . Dr Olugebefola is one of the pioneering Harlem founders and former associate art director of the Harlem Arts Alliance.

Born in the US Virgin Islands and brought by his parents to mainland USA as a child, Ademola has lectured and participated in forums at leading Universities, Museums and Cultural Institutions in America and the Caribbean.
A highly respected cultural activist and renown artist whose varied work and career features are in the permanent collections of the NY Public Library for the Performing Arts; the Schomburg Center for Research in Black Culture; Hatch Billops Archives; Studio Museum; and scores of other American and foreign institutions including the Nigerian National Archives in West Africa and The Jazzinstitut Darmstadt, in Germany; His art, with essays and articles on his career achievements, are illustrated and noted in hundreds of media publications, books, catalogs, scholarly journals and textbooks while also featured extensively on the internet and social media. His painting and current projects include working with the Society of Caribbean Artists (SOCA); New York Metro Martin Luther King Center for Nonviolence and has recently concluded his second term as a member of the Executive Committee of the NGOs associated with United Nations DPI.

Dr. Olugebefola is a Vice President of International Communications Association the owner of the Dwyer Cultural Center: Harlem's Center for Arts Innovation in it's 10th year of operation serving Harlem and the Greater New York Community.