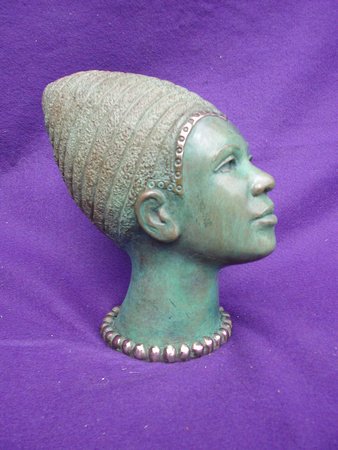 Otto Neals -ArtistPainter, sculptor, printmaker
Otto Neals was born in Lake City, South Carolina in 1930 to Gus and Della Neals. Before he was five years old, his family left the South and settled in Brooklyn, New York, where he still lives. All of Mr. Neals’ schooling was in Brooklyn, where he studied commercial art at George Westinghouse Vocational High School.
Mr. Neals describes himself as a self-taught artist although he studied briefly at the Brooklyn Museum Art School with Isaac Soyer and printmaking at the Bob Blackburn Printmaking Workshop with Krishna Reddy, Mohammed Khalil and Roberto DeLomanica. He was introduced to stone carving by sculptor Vivian Schuyler Key, who presented him with his first set of stone carving tools.
The Prospect Park Alliance and Ezra Jack Keats Foundation commissioned him in 1995 to create a bronze sculpture entitled “Peter and Willie”, based on the works of author and illustrator Keats. For this work, which is located in the “Imagination Playground” in Prospect Park, Mr. Neals was presented with the New York City Arts Commission’s “Award for Excellence in Design”.

Other commissions include 10 bronze plaques for the “Harlem Walk of Fame,” a bronze sculpture for the Brooklyn Children’s Center, a 20-foot mural for Kings County Hospital and recently a bronze portrait of the late Manhattan Borough President Percy Sutton for the City University of New York.

Besides travelling to Africa several times, Mr. Neals has made more than a dozen trips to St. Helena Island, South Carolina, for the Heritage Festival. He has been featured in several publications including Black Artists of the New Generation by Elton Fax, The New York Times and Ebony Magazine.

Neals’ art work has been exhibited at the Columbia Museum of Art, the Huntsville Museum of Art, The Ghana National Museum, The Library of Congress, The Smithsonian Institution, and the collections of Congressman John Lewis, jazz musician Randy Weston, actor/singer Harry Bellafonte and Oprah Winfrey.

About his art, Neals said, “My talent as an artist comes directly from my ancestors. I am merely a receiver, an instrument for receiving some of the energies that permeate our entire universe and I give thanks for having been chosen to absorb those artistic forces.”
2019 X Gallery. All rights reserved.
Powered by ZENFOLIO User Agreement
Cancel
Continue