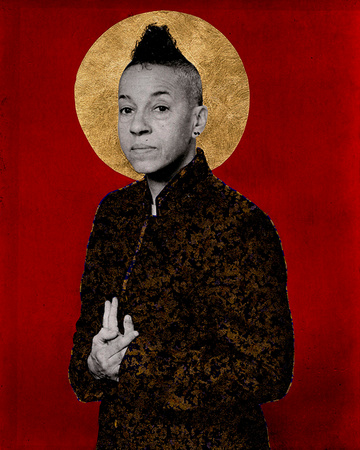 Gabriel Garcia Roman Queer Icons seriesQUEER ICONS
The subjects in the series are drawn from many facets of the gender and queer spectrum, and these images give visibility to a population that’s generally under-represented in the art world. Finding inspiration in portraiture styles of Renaissance, Flemish and Christian Orthodox paintings, the series aims to elevate these multi-dimensional, powerful and proud contemporary figures. From the queer Latina fighting for immigration rights to the non-binary disabled Trans Filipino, the artist perceived these figures as heroes in their own right. Applying a chine-collé technique to the photogravure process, the artist transmutes his subjects into icons, dovetailing textured collage and photography into one-of-a-kind prints. Though the depth of light in the prints gets flattened in the process, this repositions the portrayed “outsiders” as central to the narrative, just like saints―figures that are inherently worthy of attention, emulation, and storytelling. Much like traditional religious paintings conferred a sense of safety and meditative calm on a home; the works in this series aspire to provide a similar sense of refuge that’s drawn from the inner grace of the subjects and projected outwards onto a world that might not always be safe.
Most recently, the artist has invited his subjects to partake in the creative process by contributing writings of their own. These handwritten texts end up being an essential part of the composition, surrounding the subjects with their musings, poems and affirmations. The inclusion of these texts confers upon the prints a depth that is at once aesthetic and, most importantly, psychological. Indeed, by screen printing the text around his subjects, he affords the viewer a glimpse into their mind and sensibilities, further reinforcing the centrality of their position in this series.
Gabriels website
2019 X Gallery. All rights reserved.
Powered by ZENFOLIO User Agreement
Cancel
Continue