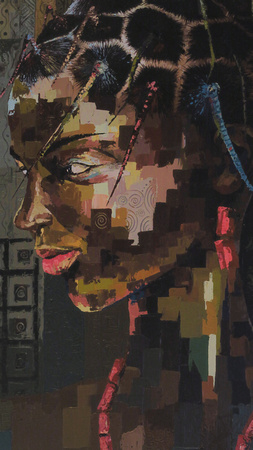 DADA KEHINDE
Artist Dada Kehinde is an indigenous Nigerian visual artist, hails from Eruwa, Ibarapa East Local Government area of Oyo State, born in 1971. He studied painting and decoration in Government Technical College Saki, Oyo state, Nigeria, Fine Art (ND) – The Polytechnic Ibadan, Eruwa. Arts, Graphics and Printing Technology (HND) – The Polytechnic Ibadan, Ibadan.
He's a recipient of the best Artist of the year Award – 1995, The Polytechnic Ibadan, Eruwa, also the best copper of the year Award 1999. NYSC Kaduna State.
He is the former General Secretary - Society of Nigerian Artists, SNA FCT as well as the current chairman Association of Professional Creative Artists and Designers in Nigeria (APCAD FCT ) known for his use of visual art as an educational tool with which he tackles corruption and other societal vices, his art has been found to be an efficient communication tool and also cuts across a number of potential barriers such as language and culture.
He was the creative art consultant for Federal Ministry of Labour and Productivity on her campaign against irregular migration, he voluntarily organised a Solo art Exhibition for the Federal Ministry of Agriculture on its 'fish for all' project - Aug. 2006 Le Meridien Hotel now Nicon Luxury Hotel, he was the Coordinating visual Artist for the Pictorial Exhibitions organized by National Library of Nigeria both for its Nigeria at 50 - Oct. 2011 ( Musa Ya’adua Centre C.B.D and centenary celebration (National Library, Area 2, Garki Abuja, as well as the coordinating artist for the Nigeria Tourism, Cultural & Economic Development Summit's Art Exhibition, Abuja 2014- International Conference Centre event park, who equally as the Society of Nigerian Artists FCT's General Secretary was part of the team leaders that led artists from Nigeria to Art Expo New York, United States of America – Pier 94. April, 2014 and April 2015. He is known to be the inventor of acrylic on Lithographic plate .
Dada Kehinde is presently practicing in New York, United States of America.

STATEMENT
When imagination which is - the eye of an artist that sees the invisible, the ear that hears the inaudible and the heart that thinks the unthinkable triumph over intelligence, then, beauty is created. 'There's no creation without a Creator, and there can never be a world without an Artist'
2019 X Gallery. All rights reserved.
Powered by ZENFOLIO User Agreement
Cancel
Continue