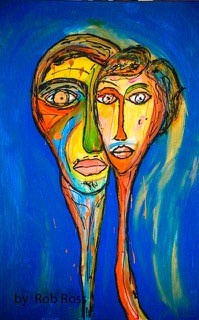 Robert Ross was born in North Carolina at the beginning of the turbulent era of the 1960's. His inspiration was formed there amidst the pressures and great promise of that era. His extraordinary imagination and artistic formation relegated him to a secret world that he inhabitant alone. Through dreams of color and flights into depths of thought, he was lead to express those same thoughts in paintings and music, but still afraid to let it be seen.


After supporting himself with different kinds of work and with the need to express art never ending, Robert moved to Harlem, NY hoping to integrate himself into a creative world unavailable to him in North Carolina. Soon the creativity began to flow and he started to let his work be seen, even teaching some classes.

Like all artists, Robert attempts to communicate through his work, thoughts and feelings. The work is light and hard-hearted, funny and serious, innocent and even strange at times. It is like seeing the light and darkness behind clouds.

Robert says of himself, "I often find myself going from one medium to another. In any given moment, an idea may show itself! A smile, a landscape, people, sounds and more, often form the ideas that are constantly challenging me to paint - the goal always being to interpret, express and share the feelings evoked with myself and others. At one of my shows, someone I have known for years, looked around the room with her sharp artistic eyes and pointing asked, 'You did that, what about that, that also and that, too?" I laughed at her. I am amazed too that this diverse body of work came from one person, me. Her surprise at this unknown diversity that is Robert Ross was a great compliment."
2019 X Gallery. All rights reserved.
Powered by ZENFOLIO User Agreement
Cancel
Continue