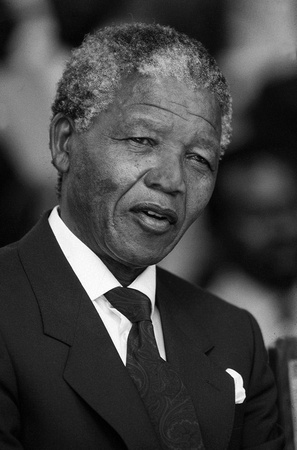 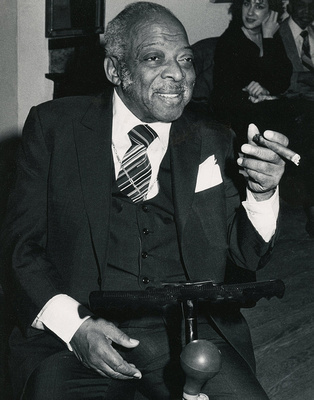 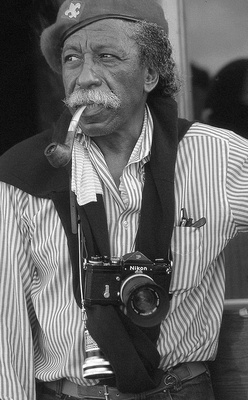 Watkins’ work has put him in rooms with some of the most powerful men including former Presidents Bill Clinton, George Bush Jr and Sr and currently Putin and President Trump. Watkins most memorable assignment was traveling to South Africa to photograph Nelson Mandela during his first tour of the US. after his release from prison.

Fred Watkins has worked as a professional photographer for over 25 years. His career in photography started in a Time-Life photo lab where he would work with fellow black photographer Gordon Parks, who was the first black filmmaker to be able to produce movies and is famous for his photography on poor Americans during the forties. As his career progressed, Watkins has worked as freelance photographer for famous publications such as Sports Illustrated, People magazine, ESPN and etc. He’s even worked for TV networks and shows such as Fox News and ABC’s Good Morning America which he has been covering since 1984. Watkins was also a staff photographer for Ebony and Jet magazine for 20 years. In the early days    as a struggling photographer, one of Watkins’ assignments was to write an essay on his mentor Gordon Parks and cover his film for Life magazine. In order for Watkins to complete this assignment, he had little choice but to put up tents due to not having enough funds to pay for hotels. Despite the troubles he encountered, Watkins was still dedicated to the craft and choose to brave through the hardships for the sake of his work.

Watkins has described his style of photography as “blurbing the subject and trying to capture them in their natural state as if he was a fly on the wall”. In other words, Watkins would study his subjects and attempt to relax them by either conversing with them or engaging with them through their favorite hobby/interests in an attempt to ease their nervousness.

Although, he may not like to admit it, Watkins has a significant portfolio of work with a large number of famous figures which is why he has earned his place in X Gallery’s exhibition.

How does your work in photography comment on current social or political issues, especially, concerning the black experience?

Watkins: Being an African American photographer covering events that are not just African American but white American too, I could see how difficult it is for some of us as journalists to fit into the white stream of America. We have to grit our teeth and watch our backs when we cover some of these news events, especially me, covering a lot of events at the White House.

How do you as a photographer make sure that the thing, person or landscape you want to shoot looks the way you want it to?

Watkins: Well, to shoot the thing the way you want it to is basically when I see something, I try to visualize how I would want that picture to look, exposure wise, composition wise and I also look at the light and make sure that if I need to use a fill in light or if am going to use available but it’s only trickier to look at a situation and determine how you want to photograph it.

Are your familiar with the works of other black photographers (both past and present), if so, did they have an influence on your work and career? Who is your favorite?

Watkins: Well, my favorite photographer was Gordon Parks. I worked and watched him dry his prints in the Time-Life photo lab. He was my mentor and encouraged me on not putting my eggs into one basket because I always use to shoot pictures and try to sell them to People Magazine and if they didn’t buy it then the pictures would go in my drawer. He encouraged me to go to other publications and that’s what I ended up doing. The second was the first black Pulitzer Prize winner Moneta Sleet who was responsible for the picture of Coretta Scott King with the veil over her face at her husband’s [Martin Luther King Jr] funeral. He was the staff photographer for Ebony Magazine and I worked with him. I worked in the same office as him [Moneta Sleet] in New York. I was able to photograph him and Gordon Parks together and of course before their time, there was the great James Van Der Zee. I use to look at his pictures and also there were some white photographers that I also enjoyed looking at through the best of life and seeing those pictures as well. I grew up in junior high school with a camera. My father was a photographer, an amateur photographer, but he did weddings and portraits and that’s how I learn the love of photography. I got my passion from watching him developing film through a makeshift dark room. He would convert the bathroom into a dark room and he would develop his films and that’s how I got the love of watching him work and watching pictures appear after he develop the print and put it in the developer and I use to watch it come alive in the image and I was hooked.

What separates you from other notable black photographers?

What does photography mean to you?

Watkins: Photography to me has been very good. It gave me the house am living in. It gave me the the car I drive in. It’s a labor of love. Something I love to do and I would have done it without the pay but it was a hobby that turn into a career. I never looked at it as work. I always enjoy the anticipation to do that next assignment which I am about to do in another half hour.