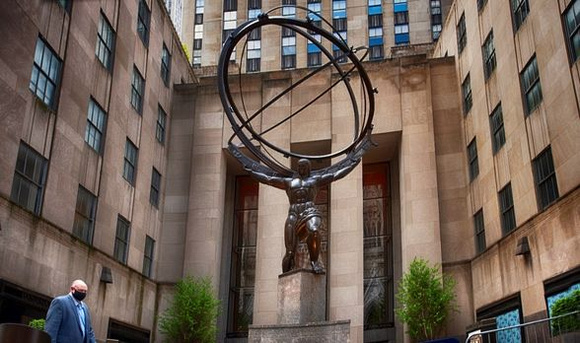 Atlas is a bronze statue in Rockefeller Center, within the International Building's courtyard, in Midtown
Manhattan in New York City. It is across Fifth Avenue from St. Patrick's Cathedral. The sculpture depicts the ancient Greek Titan Atlas holding the heavens on his shoulders.
Atlas was created by the sculptor Lee Lawrie with the help of Rene Paul Chambellan and was installed in 1937. The sculpture is in the Art Deco style of Rockefeller Center. The figure of Atlas in the sculpture is 15 feet (4.6 m) tall, while the entire statue is 45 feet (14 m) tall. It weighs 7 short tons (6,400 kg), and is the largest sculpture at Rockefeller Center.
Atlas is depicted carrying the celestial vault on his shoulders. The north-south axis of the armillary sphere on his shoulders points towards the North Star's position relative to New York City. The statue stands on one muscular leg atop a small stone pedestal, whose corner faces Fifth Avenue.
xgallery website
[email protected]
[email protected]
www.duboisphotoart.com
instagram @duboisphotoart
2019 X Gallery. All rights reserved.
Powered by ZENFOLIO User Agreement
Cancel
Continue