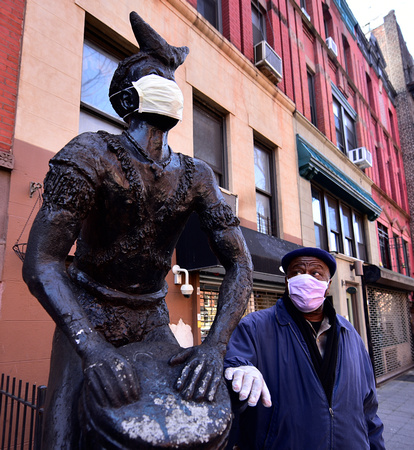 For many years, artist and activist Ademola Olugebefola has been an influential member of the black community in Harlem, New York. Ademola was born in St. Thomas, Virgin Islands, and moved to New York with his family in the 1940’s at the age of five. Throughout his childhood, Ademola was deeply encouraged by his parents, especially his mother, to regard his education and academic life as a priority. At a time when racial inequality and the persecution of African-Americans was very much alive in the U.S., access to an education was a vital tool in combating oppression. Ademola’s many trips to the library as a child enticed his love for reading and visual imagery, eventually leading him to develop a passion for the arts.
Ademola’s artistic career began with his work as a bassist. Due to his mother’s love for music, he grew up in a household in which music was constantly playing. Throughout the 1950’s and 60’s, as he continued his musical career, he began to understand that music had “the capacity to change the human psyche” and “open up new portals”. Ademola soon became intrigued by the way in which music, especially jazz, could be translated into visual art. He was convinced that different notes had an equivalent in the color scale, and would often envision colors while playing. He, thus, undoubtedly believed that there was a connection between the power of music and visual art. He understood that art, regardless of its form or medium, was not only a celebration of culture, but also, a tool that could expand the human consciousness, allowing it to view the world through various, new lenses.

As noted by Ademola himself, the merging of music, spoken word and visual art had existed African culture for many years; masks, costumes, chants and village ceremonies were essentially forms of artistic expression. In the 1960’s, when Ademola began his career in visual art, much of his work was influenced by African art. In the first 10 years of his career as an artist, he began to gain recognition for his woodcuts and graphics, all of which merged traditional african images and contemporary reality.
In 1965, Ademola, along with a group of African-American artists based in Harlem, founded the Weusi Artist Collective. The group aimed not only to inspire and encourage one another, but also to uplift the black community by creating images that showcased the power and beauty of their roots. The collective redefined the goal of art itself, using it as a tool for activism and empowerment. They aimed to deconstruct the derogatory images of African-Americans that had been perpetuated for decades. Ademola’s artwork, as well as the work of other members of the collective, consisted of images that showcases black men and women in a regal manner, while also paying homage to their african heritage. Furthermore, Ademola aimed to create imagery that celebrated black family units; this was especially illustrated in his woodcut piece, “Fertility”.
The Weusi Artist Collective understood that in order for the black community to acknowledge and realize their power, there had to be a shift in the way in which they perceived themselves. The collective often visited churches and spoke to priechers about reinterpreting “the savior image”. For centuries, the image of Christ, both in black and white churches, had been the image of a white man. The Weusi Collective urged black church leaders to replace those images with ones that depicted a savior of color. “We told them that if we were made in God’s image, this was not our image,” said Ademola. In numerous cases, their message was well received, and images of a black savior appeared in churches throughout New York. Ademola, himself, created pieces that merged the traditional history and imagery of Christ with African culture. His woodcut, entitled, “Burden of Injustice” was a reinterpretation of the crucifixion, inspired by a carving he spotted on a door in Nigeria.


Over the last years, Ademola’s work has been featured in numerous exhibitions, cultural centers and galleries, including the Brooklyn Museum, the Miriam and Ira D. Wallach Art Gallery, the Hood Museum in New Hampshire, the Albert Shahinian Gallery, X Gallery, and many more. His illustrations have also appeared in novels by renowned writers, such as Sonia Sanchez, who is known for her literary work during the Black Arts Movement in the 60’s and 70’s. Collections of his artwork and archives can be found at the Schomburg Center for Research in Black Studies and at the New York Public Library for the Performing Arts. Today, Ademola continues to influence, uplift and mobilize the black community through his work as the Vice President of the Dwyer Cultural Center in Harlem, a facility “dedicated to supporting Harlem’s artists and arts organizations and promoting the community’s cultural life.”
LisaDuBois
Powered by ZENFOLIO User Agreement
Cancel
Continue