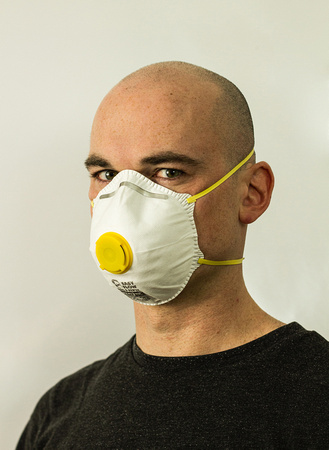 
Artist Statement
The root of the mask (from Arabic masḫara = mockery, also pose, joke) lies in religious, cultic actions. The face covering can fulfil very different tasks in different contexts: Masks are worn to slip into a role, to maintain anonymity, to emphasize a certain attitude, but also to protect against external influences at work or during sports (e.g. dust mask, diving mask). In the kingdoms of Africa, mask performances are demonstrations of education, instruction, social, cultural and economic integration, but also social control and political power.
The wearers of a mask were not simply seen as disguised people, they were perceived as the addressed spirits or ancestors themselves. In southern Germany, the mask, often made of wood or laminated paper, which is worn for Fasnacht is called larva (Latin: larva - ghost). The larva is also known as a term in theatre studies, for example in the Japanese NōTheater. Figuratively speaking, larva refers to the disguise of a person who wants to hide his evil intentions. Derived from the larva is the verb "to unmask", which was a metaphor for unmasking. Today, face coverings in public space are only known from special situations: masked Demonstrators, activists with Guy Fawkes masks, veiled terrorists or even veiled women in Islam. The Corona pandemic has suddenly given the respirator a worldwide omnipresence. What happens through the veiling of the major part of our face, which is central to communication and facial expressions? What does this mean for our society, which is characterized by individuality and self-expression?